The Advanced Manufacturing Growth Centre (AMGC) has co-funded two Australian manufacturers to assist with the development of technology to generate power from air. Capricorn Power and Cool Mine have been awarded co-funding to advance their ground-breaking heat-to-electricity generator and thermoelectric generator (TEG) technology, respectively.

Both projects take an existing resource, compressed air, hot air or gas, and convert it into usable electricity. Capricorn Power use waste exhaust or biogas and convert it into electricity via a patent-pending Barton engine system. This power can then feed energy back into the local grid providing power for local industry or up to 120 homes.*

Cool Mine’s AIR2VOLTS™ system leverages TEG technology, whereby temperate differences produce a ‘Seebeck’ effect to generate electricity between two conductors. This technology has been used to power deep space probes and is ideally suited for use in underground mines where access to reticulated electrical power can be both difficult and dangerous, however, access to compressed air is not.

Managing Director of AMGC, Dr Jens Goennemann, said that both technologies demonstrate the critical role manufacturing plays across the entire value chain, from design to research and development, and then onto sales, service, and support.

“Capricorn Power and Cool Mine are stunning examples of the manufacturing multiplier effect, with jobs generated across the entire manufacturing value chain. Both technologies benefit from highly skilled design and engineering staff, and now, as the businesses move to the production, sales, and service phase, more jobs will follow,” said Dr Goennemann.

“Both technologies take an available resource, air, to generate emission-free power that in the case of Capricorn Power can be fed back into the grid or, in the case of Coolmine, power communications and monitoring equipment in underground mines in a safe and emission-free manner.” Dr Goennemann said.

Capricorn Power’s Barton engine takes full advantage of high temperature gases with the engine designed to achieve 33% efficiency at 450°C. The Barton engine will be able to use a variety of external heat sources and can operate at pressures less than 20 bar, which allows the use of standard, low-cost materials for the recovery equipment and generator.

The team is working with organisations with large amounts of agricultural waste, as it is able to work with charmaker producers in order to take these waste sources that would otherwise be destined for landfills, and produce biochar alongside electricity. Biochar is widely used for soil regeneration and adds to Capricorn Power’s mission of accelerating the circular economy.

The Barton engine can also compete in the gas flare market, where it will vie against internal combustion technology such as gas-fired reciprocating engines or gas turbines. The engine has external combustion and simply exchanges the heat from existing gas flare flue or other heat sources such as landfill gas and biogas.

Dr Noel Barton, co-founder of Capricorn Power and inventor of the Barton engine, said “sites that produce over 3,000 tonnes of organic waste per annum could significantly benefit from deployment of Capricorn Power’s solution.”

Mike Hodgkinson, Capricorn’s CEO stated, “Having AMGC involved gave us a push to consider with whom we partnered and how we managed the project. Their industry network is outstanding – they are the reason we have Deakin University involved,” said Barton.

With this project investment the company is expected to grow by 10 people during 2020 and, by meeting commercial milestones, double in size each year. The project is also a key enabler for expansion and further technology evolution, with product development and advanced manufacturing positions becoming available at partner organisations and suppliers.

Safe for use in underground environments, Thermoelectric generators can make use of many different heat sources, including body temperature, waste heat and nuclear fuel. The advantages offered by TEGs range from silent operation to compactness, to impressive reliability – due to the lack of moving parts.

AIR2VOLTS™ leverages these benefits, along with ready access to compressed air, to bridge power supply issues in underground mines and tunnelling and run low-power Wi-Fi nodes, gas, strata and environmental monitoring systems and other devices in power black-spots, such as emergency evacuation lighting

Cool Mine Founder Mark Gleadhill said the assistance from AMGC went beyond just funding support. “Co-funding from AMGC will allow us to further commercialise our AIR2VOLTS™ system and roll out this potentially life-saving, operationally beneficial technology to mines locally and abroad,” Said Gleadhill.

It is expected that the project will generate a minimum of nine new roles across the entire manufacturing value-chain in the first three years after release.

*Calculations based on proof-of-concept unit developing 75 kilowatts, which at 90 per cent capacity would power up-to 120 homes. 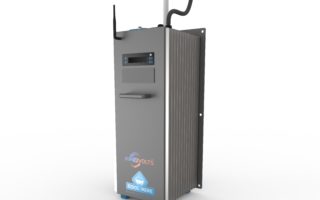