A Territory-developed insulation solution, designed for the unique climatic and weather requirements of tropical regions, is set to displace fully imported material via a co-invested project from the Northern Territory’s (NT) Advanced Manufacturing Ecosystem Fund (AMEF). The NT-developed panels will also satisfy cyclone standards and in time, be further developed for broader applications across the agriculture and fishing sectors.

Developed by Darwin-based Arctic Installations, the Territory’s only manufacturer and installer of Insulated Panel solutions, the new cyclonic design has the potential to displace products imported from Asian markets and interstate suppliers.

The project, backed by the Territory Government and Advanced Manufacturing Growth Centre (AMGC), brings together production machinery company MDI Systems, engineering service provider Rapid Engineering NT, and James Cook University. As a result of the co-invested project, Arctic Installations estimates an additional $15 million of revenue will be generated over the initial five years, while also creating 25 new jobs within the Territory’s manufacturing ecosystem over the same period.

The project will assist Arctic Installations to reach the Design for Manufacturing (DFM) stage, commission a new plant, subject several prototype panels to structural and cyclone testing, and launch a new locally manufactured product by the end of 2023. Arctic Installations is investing $500,000 in the project, with an additional $1.4 million in-kind contribution and a further $500,000 in co-funding from the AMEF.

Gary Burns, Managing Director of Arctic Installations, said: “This co-investment will not only assist us in displacing imported products from overseas and hauling from southern states, but it will also lead to the generation of local jobs and boost local capability, thus bringing the lead time down from months to days,

“It’s deeply satisfying to bring together a number of Northern Territory entities to solve a market need and develop a superior product that has applications far beyond our shores.

“In fact, we have just secured our first export deal with ETO energy in Dili which is a great endorsement of what we can do. Going off-shore opens up various opportunities within our region north of Australia and with further research and marketing we would like to aim further afield” said Burns

AMEF is accelerating the Territory’s advanced manufacturing capabilities and capacity, and we are seeing projects and industries coming alive right across the Territory from the Red Centre to the Top End.

Arctic Solutions will be manufacturing and commercialising bespoke roofing panels which would have otherwise been sourced from interstate, establishing a local supply chain, supporting Territory businesses and creating local jobs.”

Northern Territory Major Projects Commissioner, Jason Schoolmeester, said: “With this announcement of co-investment into Artic Installations, the AMEF has now invested more than $1.3M to support projects worth more than $8.1 M in the Territory.

“This investment is supporting collaboration between local and interstate businesses to bring new capability and technology to the Territory and growing jobs and business opportunities in the new supply chains being developed.”

AMGC’s Director for the Northern Territory  Charmaine Phillips, said: “In just over 12 months, the AMEF program has proven that there are world-leading manufacturing ideas in the Territory and with the right support and funding we can turn ideas into commercial outcomes,

“Arctic Installations demonstrates that we can and should be leveraging our unique climatic and weather conditions to develop better solutions for our region and beyond our shores. This project adds to the list of Australian innovators seeing that imported products sometimes don’t meet our tough local conditions, then coming up with something better.” 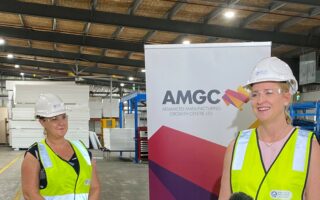